Born in Brazil in 1961, artist Antonio de Campos is arguably only known to a few people – but this is not true of his famous client or the works he did for her between 2000 and 2016 – namely as artistic consultant for Zaha Hadid Architects. Until now, the perception of the firm’s architectural images has focused on the charismatic founder. The exhibition in DAM shifts the perspective and spotlights how much Antonio de Campos contributed to the finished products.

Zaha Hadid became known in the 1980s for her architectural images. She combined layers of detail and different viewpoints, axonometries and distortions in her depictions of the projects and the results were wondrously intricately charged and confusing architectural images. Alongside the buildings and design objects, these images form a separate area of the architect’s oeuvre.

Hadid’s major breakthrough as an architect came as of the turn of the millennium with solo shows at the MAK in Vienna (2003) and the Guggenheim Museum in New York (2006). In recognition of her work she was awarded the Pritzker Prize in 2004. Buildings from those years include the Phaeno Science Center in Wolfsburg, Germany (2005); the Aquatics Center for the 2012 Summer Olympics in London, England; the Heydar Aliyev Center in Baku, Azerbaijan (2014); and the Messner Mountain Museum in South Tyrol, Italy (2015).

Educated as an architect and filmmaker, Antonio de Campos, was involved in image production of Zaha Hadid’s office from 2000 onwards. In the 1990s, rapid advancements in graphics programs and digital video animation opened up more and varied options for visualizing objects; as Creative Director of a video production company de Campos was very much part of that trend.

The computer accelerated and changed the ways in which complex buildings could be represented. Allowing the elements of architecture and film to merge became the new hallmark of Zaha Hadid’s architectural representations after the turn of the millenium. This where Antonio de Campos came in: as the artist consultant who created a significant number of the large-format images in the 2006 exhibition at the Guggenheim Museum, for example.

At DAM Ostend, around 43 works by de Campos will go on show, some of which consist of several parts. They were created between 2003 and 2015 as preliminary works and intermediate stages for objects that were then used by Zaha Hadid Architects. The exhibition features complex collages of prints, foils, and spray techniques.

Impressions of the exhibition 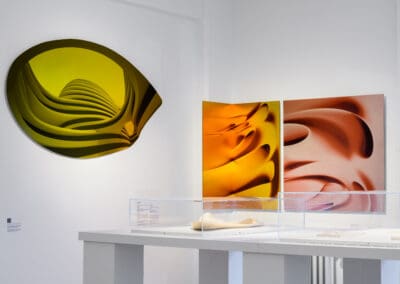 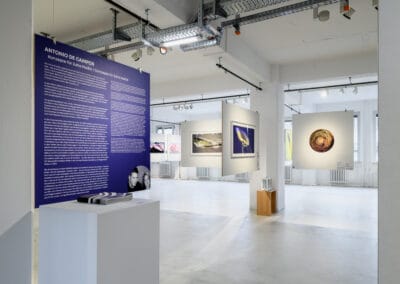 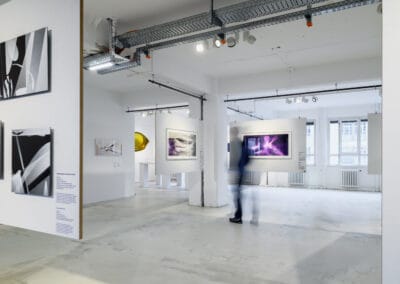 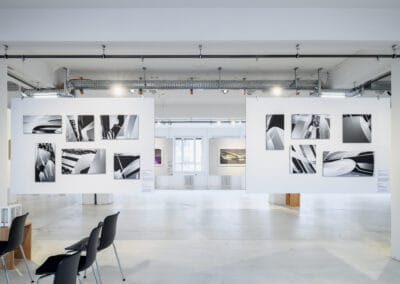 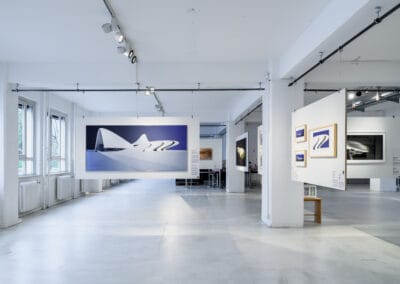 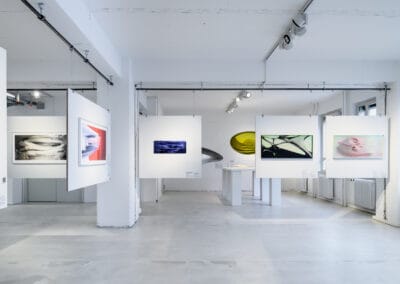 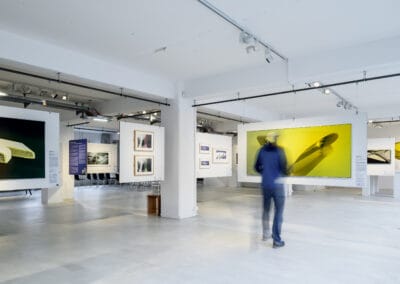 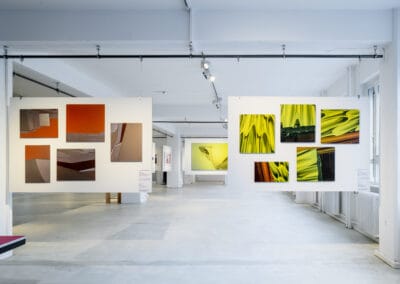