The final of the International Highrise Award (IHP) 2020 has been decided: The winner of the competition for the world’s most innovative high-rise is the ‘Norra Tornen’ twin towers project in Stockholm/Sweden designed by the Office for Metropolitan Architecture (OMA) in Rotterdam. The prize comes with 50,000 euros and a statuette created by internationally renowned artist Thomas Demand.

Due to the restrictions imposed as a result of the coronavirus, architect Reinier de Graaf, partner at the Office for Metropolitan Architecture, and the developer Oscar Englebert from Oscar Properties in Stockholm were unable to visit Frankfurt’s Paulskirche to receive the award in person. Instead, the statuette and check were presented symbolically in a digital ceremony by Dr. Ina Hartwig, the City of Frankfurt Deputy Mayor for Culture, Dr. Matthias Danne, Deputy CEO of DekaBank, and Peter Cachola Schmal, Director of the Deutsches Architekturmuseum (DAM).

The winning building, the Norra Tornen twin towers (which translates to “northern towers”), convinced the jury with their timeless yet pioneering architecture. The combination of high-quality prefabricated concrete elements, their skillful arrangement into individual loggias, and the contrast with the fine details of the interiors are definitive features of this high-rise. Furthermore, the appearance of the Norra Tornen makes an important contribution to a coherent urban fabric. The twin towers, the jury said, are also an expression of an equal society, hence they convey not only a characteristic of Swedish culture, but also a universal message.

Norra Tornen are located in Stockholm at the transition from Vasastaden, a district with residential developments mainly from the 1930s, to the newly emerging district of Hagastaden to the left and right of the Torsgatan arterial road, and can be considered a new symbol of the city of Stockholm for this expanding district.

DAM Director Peter Cachola Schmal pointed out that the Norra Tornen create a newly emerging gate situation that is shaping urban development with its sculptural effect. They represent a contemporary and future-oriented vision for the city and pick up on a familiar motif of urban design in Stockholm. Twin towers have been incorporated as a symbolic gateway in the Swedish capital previously in the past, and the towers are simultaneously able to incorporate Stockholm’s older architectural structure in their color scheme and rising shape.

This mediation between the old and the new is one of the great design strengths of Norra Tornen. With the soft brown of the implemented solution, the façade blends in perfectly with Stockholm’s earthy color range, which includes all shades from beige to red. The sheltered balconies and the cube-like modules alternate in a regular pattern and create a sculptural game of deception.

The use of prefabricated façade elements made it possible to continue the construction work even at temperatures below five degrees Celsius. In addition, prefabrication saved considerable time – one story was completed each week – and costs, which made the differentiated façade treatment and dynamic surface with its numerous recesses and projections economically feasible in the first place.

Statements by the winner and partners of the IHA

Reinier de Graaf thanked all the promoters: “OMA shares the prize with its partner Oscar Properties, which is equally delighted about it. The office had already been nominated twice before for the International Highrise Award, with the TVCC in Beijing in 2008 and De Rotterdam in Rotterdam in 2014. For me, the award came somewhat unexpectedly because I never considered the Norra Tornen towers to be high-rise buildings. They are very different from the conventional idea of a skyscraper. They are not monumental but homely, and their aesthetics are informal. At the same time, they embody diversity and not repetition. We are delighted to be getting more and more requests from other countries that want similar projects and this award will certainly help to raise the profile of Norra Tornen even further.”

Dr. Matthias Danne, Deputy CEO of DekaBank explains: “The two residential towers as a gateway to the city are an urban enrichment for Stockholm and an excellent example of architecture with a timeless image and a certain degree of understatement. The design of the structures with modular, box-like bay windows and the surface design with rough concrete elements set a remarkable accent in the cityscape. This design is a real asset for the further development of Stockholm.”

Dr. Ina Hartwig, Deputy Mayor in charge of Culture of the City of Frankfurt, expressed herself enthusiastically: “From a distance, the nested cubes of Norra Tornen have the playful appearance of a Lego tower; from close up, you can see the model of equality so deeply rooted in Swedish society: a residential solution for the big cities of the future that is both elegant and pragmatic. This project is a well-deserved winner of the International Highrise Award 2020 and shows that Sweden has pioneering architectural solutions in international comparison.”

The director of Deutsches Architekturmuseum (DAM), Peter Cachola Schmal, congratulates the architect and developer: “on a project that is a refreshing entrance to the city, recalling structuralist models of brutalism from the 1960s such as the Habitat from Expo67 in Montreal, skillfully transforming them and enriching the city with a new urban dominant, with apartments for all that nevertheless celebrate the private sphere.”

During the award ceremony, the four other short-listed projects were also honored:

From over 1000 high-rises that were completed worldwide over the last two years, Deutsches Architekturmuseum (DAM) nominated 31 outstanding buildings from 14 different countries. An international jury of experts consisting of architects, structural engineers and real estate specialists and chaired by Anett-Maud Joppien (architect at Dietz Joppien Architekten AG in Frankfurt am Main/Potsdam) gathered to select the final five for the shortlist and subsequently the winner.

The International Highrise Award (IHA) was jointly initiated in 2003 by the City of Frankfurt, Deutsches Architekturmuseum and DekaBank and was awarded for the first time in 2004. Since then, it has been organized and financed cooperatively every two years. Hence, this year the prize was presented at Frankfurt’s Paulskirche for the ninth time.

The IHP is aimed at architects and developers whose buildings are at least 100 meters high and have been completed in the past two years. On the way to their decision, the jury’s wide-ranging discussion considered how a high-rise contributes to the urban fabric and how it encourages street life. The following aspects were analyzed, among others: the overall narrative, the sculptural qualities, the structural concept, the mix of uses, and the balance between commerce and culture.

The exhibition “Best Highrises 2020/21 – International Highrise Award 2020”, will run at Deutsches Architekturmuseum (DAM) in Frankfurt from October 31, 2020 through February 2021 and will not only present the prize winners and finalists, but all 31 nominated projects. 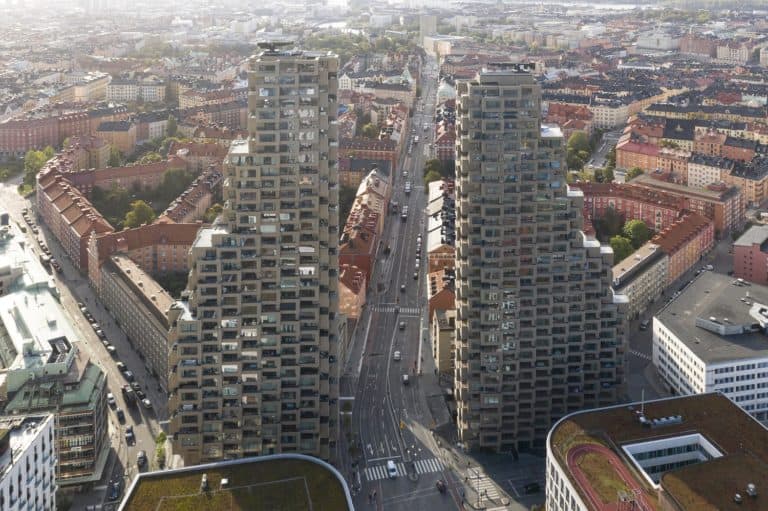